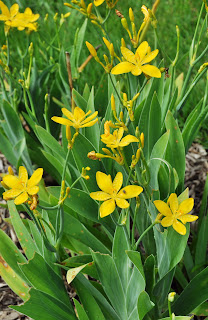 While I was away for a couple of weeks at the beginning of this month, most plants have continued doing their best to survive the high heat and low amounts of rain.  We installed three different sections of soaking hoses for a few sections of the labyrinth beds, running them for a few hours before traveling and again on coming back.  Some plants have done well, a few have been lost, and others have naturally shut down while enduring the weather.

The Blackberry Lily, Belacanda chinensis, has had it tough all year, but continued to keep growing and blooming.  At the lower left hand corner of this picture you can see the ragged edged leaves where something chomped it down in the Spring.  What finally protected it were the Alliums that were planted among it, which discouraged further damage.  But there have been lots of flowers to replace those eaten. 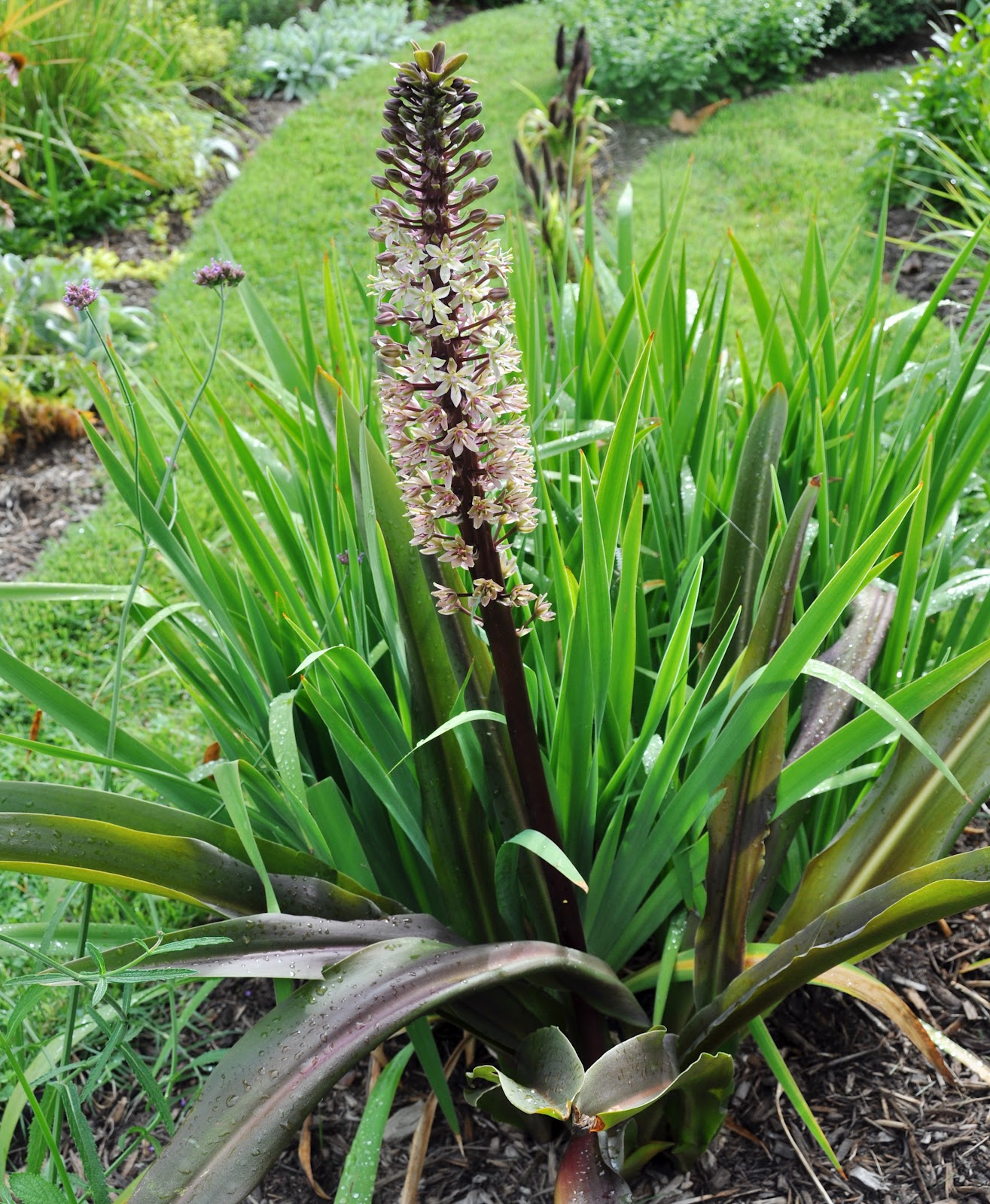 The Pineapple Lily, Eucomis comosa 'Sparkling Burgundy,' shown here in late June, has put in its best performance in the three years in this location.  The reason for the name can be seen in the large maroon leaves and the dark stem.  Those other iris-type leaves are exactly that, iris!

The color has changed with the heat of July and August, losing much of the dark purple, and becoming more of a nondescript off-color green.  I have almost come to expect that of any other-than-green foliage, to fade in the heat, so it is not a surprise. 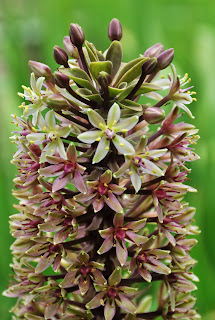 I took picture several weeks after the first picture which shows the top flowers. You can see how the color is mixed into each small flower a little bit differently, creating a very impressionistic appearance.  It becomes an interesting combination of the impressive architecture for the thick column of flowers with flowers that can be seen almost at eye-level, with their individual variety.

The other plants that have continued blooming through the harsh weather are the hardy hibiscus.  There are currently three plants, ranging from deep scarlet, to mauve to a bright, clear pink.

'Walter Fleming' is the scarlet one, and it continues to perform well in its third year in the labyrinth. 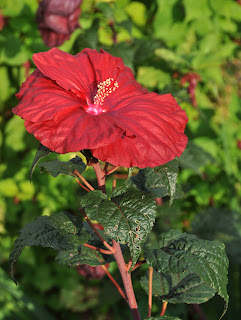 The William Fleming had six different stems grow up this year, each with a few dozen flowers blooming in the first phase.  After the first set of buds finished their cycle, around the end of July, there was a period with fewer blossoms as the plant produced buds on side stems.  Those are now in the cycle of blooming, and I suspect they will continue doing that until sometime in September.

With the size of each flower around nine inches, and the dark intense red able to hold its own in bright sunlight, this plant offers important color to the garden.  I am well pleased with this choice. 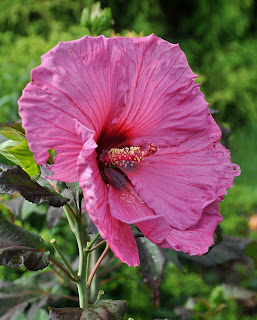 I don't know the name of this pink/mauve hibiscus, having lost the label since we bought it two summers past, and I forgot to record it at that time.  It spent its first summer in a pot on the front porch, then was moved into its permanent home. It has settled into its spot, putting up 5 stems with lots of flowers, and providing a nice contrast.

I have done some Internet research, but have been unable to positively confirm its name.  So, if you know, let me know.

Posted by Bruce Calvin at 7:30 PM No comments:

Bruce Calvin
Baptized into the priesthood of all believers, I continually seek to be open to God’s call. I am a member of the Episcopal Church which openly affirms and welcomes my participation, encourages my spiritual growth and honors my gifts. I am a spiritual director, a recorder player, a labyrinth walker, a gardener, and a journaler. Sharing the ordinary difficulties of daily life with my partner since 1980, we were finally allowed to be married in Maryland in 2013. Living together through times of celebration and sorrow, I am grateful for his constant friendship and love.